I finally did it! I have finally written all the dialogues!

So, both comments and dialogues are done. While making those I've made few changes to the characters descriptions, added few more sub-quests, defined few achievements and added some new NPCs.

Maybe I'll add more interactable NPCs by adding few lines of text to unimportant ZOO tourist, but that's something I don't feel necessary right now because I have 27 NPCs already.

There'll also be a few more comments when I'm done with achievements and of course when fights start and finish.

Now that all (basic) comments and all dialogues are done I can start making game prototype... at least I would, but I have other things to do. I need to live and eat, so I need to work.

But have no fear – I'll do my best to finish this game!

Dialogues are so cool it would be a shame if no one ever enjoys this literary masterpiece I did!

My next step would be to define RED parts of my GDD – cut-scenes, minigames, fighting mechanic. Parallel to this I would like to start creating game prototype. Since minigames and fighting can be added later and are triggered by events, all other gameplay elements can be easily implemented after the main story and quests are implemented.

One setback is game art, but I believe I could make game prototype using default art for tiles, characters and items. In the later stage of development I should be able to easily replace this placeholder art with new art.

At least RPG maker seems to be easy enough in that regard.... I hope I'm not mistaken.

Also my goal regarding scene art is to overpaint the scenes at least a little (depends on the time I'll have for that) so they could look less generic and more interesting.

To go back to the comments and dialogues – maybe I did too much, and if this was a commercial project I would most likely need to make dialogues and comments more compact because of the localization costs and I would keep just few interesting characters for longer dialogues.

But since it's not the case I let myself go and wrote a lot of dialogues. Almost all the characters in this game are... colorful.  It took me some time and a lot of inspiration, but I'm finally satisfied with what I've written.

I hope it will be enjoyable to the players. People that played JessieKA1 asked me to keep the same level of humor, sarcasm and silliness and I think I did that alright!

And I decided not to make a lot of dialogue choices. In most point and click games player can chose what to ask or which topic to start, but everyone eventually chose all the options.

To avoid this I just tried to keep it simple, but because of that I tried to make conversations interesting and funny.

This is current state of the GDD: 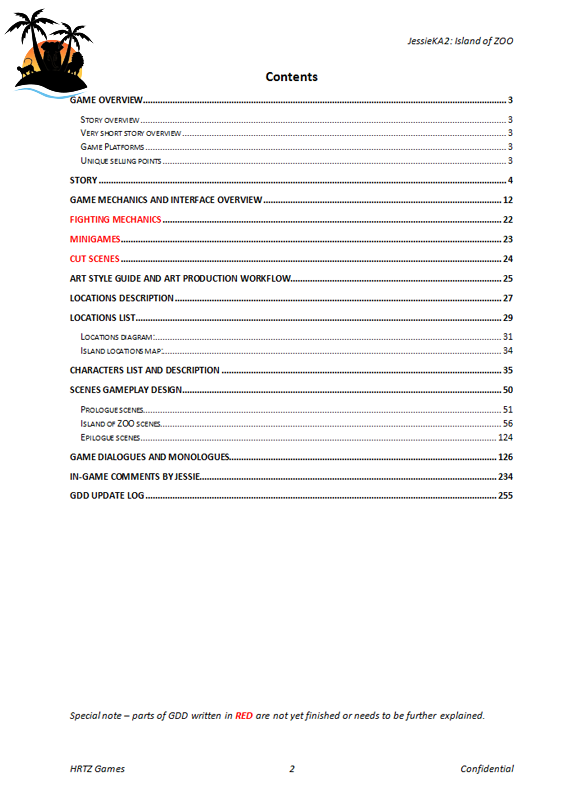 But as part of dialogues I've also added lines that will be important for defining and creating cut scenes – like when character exits or enters the scene, approaches to another character, turns, interacts with something....

Defining these elements while writing dialogues is much easier to do and will quicken describing cut scenes later. Cut scenes in RPG maker are simple so most of those lines will be adequate to use as cut scene descriptions as they are.

And that's it for now!