Here is the current state of mockup gameplay implementation. I added all in game comments, items, most of the global variables and many dialogues with ingame animations (player and NPC movements). 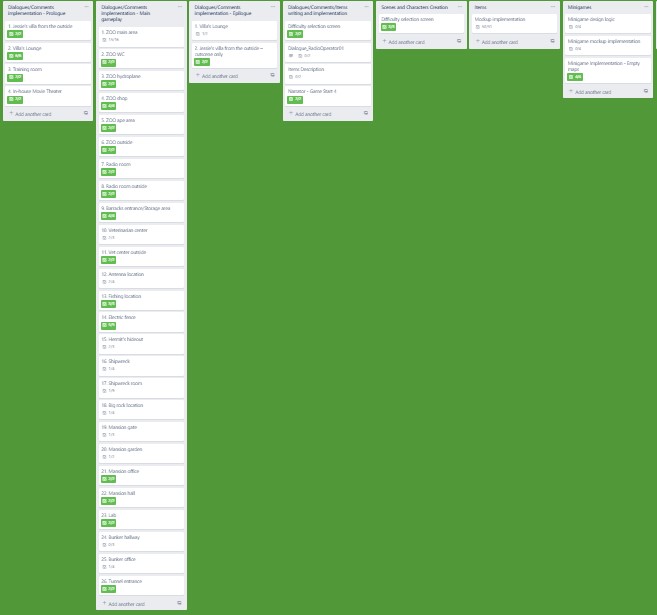 Screenshot is a little blurry since I don't want to spoil things, but the second column is the most important one. It represents main game scenes. Prologue scenes are already done.

I've also added some new stuff... I can't help myself - I had a few cool ideas. For example I'm just writing a new dialogue. It's just a few lines but it will make ingame animation more interesting and funny... that kind of stuff I'm adding.

Sometime it's good when you are not pressured by deadlines so you can improve so easily.

As you may notice I'm avoiding my usual rant, I won't talk about my disappointment in game industry. I feel much better now. I even took some time to try myself at miniature painting. Can't sit by computer all the time... and it helped me to calm myself down, put away negative thoughts.

I think I will have mockup game finished in next 2 months. There are only few technical issues I'm not sure how I'll finish, like Item combiner logic. I found some plugins but they are too clunky for this gameplay. RPG maker has its own issues with certain logic and I was aware of that. Maybe I'll do something by myself to solve this.

While I'm talking about items - I definitely decided to use Key item logic, which means player will not have to drag item over interactive area on the screen to use it like in old school point and click games. If player has the item in inventory Jessie will use it automatically. I know this reduces gameplay time, but I'm also aware that players these days are not used to that kind of item-dragging frustrating gameplay... actually even I'm not used to it anymore! So... I think this will make the game more fun and less annoying.

That's all for now, stay tuned!